MESSAGE FROM THE CHAIRMAN: ÇEVKO FOUNDATION IS 27 YEARS OLD 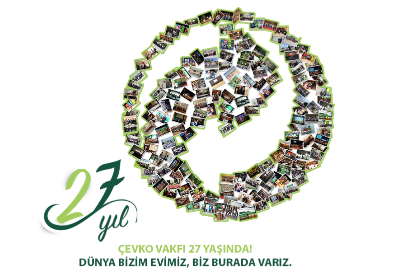 Dear Stakeholders,
As the scientist Carl Sagan pointed out in his memorable oratory, we all, the whole humanity, with everything that we have produced, with our past and future, with every living and non-living being that we share the planet with, occupy a place on this planet Earth, which, when seen from a far away corner of the space, looks like a pale blue dot. This is our home and we exist here.
The continuation of our existence depends on environmental sustainability. And for a sustainable environment, a sustainable recycling system formed by the contributions of the business world, public administration, local authorities, consumers, and the media, is of the utmost importance.
ÇEVKO Foundation, which started out voluntarily on 1st November 1991 with the recycling of packaging waste to protect the environment, to contribute to the economy, and for social development, continues to apply this sustainable recycling system in the best possible way in Turkey.
ÇEVKO Foundation was declared Turkey’s first Authorized Organization in 2005 and since then has provided the recycling of almost 6 million tons of packaging waste. The steps we have taken for recycling provide the economy of our country with billions alongside having a positive effect on a sustainable environment. The system which we have set up has become a sector with the addition of other newly authorized organizations.
Following our 27-year-old continuous development journey, we are now working on recycling together with 162 county municipalities that have the highest population in Turkey. With our 51 members among whom there are the greatest firms of Turkey, we are fulfilling the recycling obligations of approximately 1,900 companies.
Alongside industrial organizations, together with municipalities, licenced packaging waste collecting-separating and recycling firms, we are providing a reduction in the use of fosil fuels, water, and energy, and a decrease in the consumption of natural resources and energy. With our “Green Dot Industrial Awards” we are rewarding the member companies for their efforts beyond their legal responsibilities. We are also encouraging media organizations that give priority to news items regarding recycling and public awareness with our “Green Dot Press Awards.”
In addition, we have assumed intellectual leadership on Circular Economy, which is a relatively new concept in the world and which deals with the processes of “sustainable production,” “sustainable consumption” and “upward recycling” in the form of a “circle” instead of the “Produce!-Use!-Dispose!” concept. We started the movement in 2017 with a congress and are continuing this year with a series of workshops intended for different sectors.
At the same time, we are working together with all concerned parties, mainly our foundation members for the dissemination of the “Zero Waste” Project of the Environment and Urbanization Ministry of the Turkish Republic.
As for the consumer side, which is the starting point of recycling, we are trying to spread the concept of recovery among the majority of the community to get them to acquire the habit of collecting waste separately at the source. Our aim is to make the consumer see that packaging waste is not garbage but a power to contribute to the sustainable environment. For this purpose, via public spots, commercials, and news studies we are calling on millions of people; we are performing different activities working in collaboration with the public, local government, community, and the industry.
Also, we are organizing trainings for primary school teachers, and theatre plays for children. We are making an effort for recycling to increase by placing in different regions waste collecting bins with different designs, decorated with the works of caricature artists.
We are doing all of these things so that we can sustain our existence on the “pale blue dot” which is our world.
We have come a long way, yet the distance ahead of us is much longer, but this is an exciting journey. I wish to thank all of our stakeholders, our members, local and central governments, leaders of the business world and industry, students and teachers, consumers, whose recycling awareness is growing steadily, for being with us every step of the way.
Happy 27th Birthday ÇEVKO Foundation.
My best regards,
Okyar Yayalar
Chairman