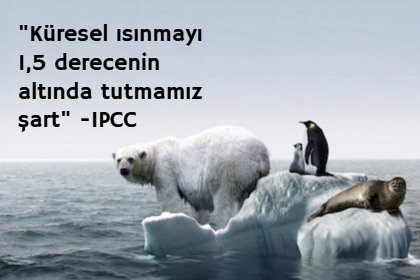 The 48th session of the Intergovernmental Panel on Climate Change (IPCC-48) has approved a Special Report on Global Warming of 1.5°C (SR15) and its Technical Summary, and adopted a Summary for Policymakers (SPM), following its line-by-line discussion. According to the Panel, limiting the global average temperature rise to 1.5ºC is still possible; however, it will require “unprecedented” transitions in all aspects of society, including: the transformation of energy, agricultural, urban and industrial systems; engagement of non-state actors; and integration of climate action into broader public policy and development frameworks.

The Summary consists of four sections:
• Understanding global warming of 1.5°C;
• Projected climate change, potential impacts and associated risks;
• Emission pathways and system transitions consistent with 1.5°C global warming; and
• Strengthening the global response in the context of sustainable development and efforts to eradicate poverty.
The underlying report assesses the latest science on 1.5ºC of warming above preindustrial levels as opposed to 2ºC of warming, which is projected to lead to worse global and regional climate impacts, exposing 420 million more people to severe heatwaves, for example. One of the report’s key messages is that the consequences of 1°C of global warming are already being observed through more extreme weather, rising sea levels and diminishing Arctic sea ice, among other changes. The report highlights climate change impacts that could be avoided by limiting global warming to 1.5°C compared to 2°C, and examines various pathways to limit warming to 1.5°C, what it would take to achieve them and their consequences.

The report explains that global anthropogenic carbon dioxide (CO2) emissions would need to decrease by about 45% from 2010 levels by 2030, reaching net zero by around 2050, meaning that any remaining emissions would need to be balanced by removing CO2 from the air. Allowing the global temperature increase to temporarily exceed or “overshoot” 1.5°C would necessitate greater reliance on CO2 removal techniques to return the global temperature rise to below 1.5°C by 2100. However, such techniques, including carbon capture and storage (CCS), are unproven at a large scale and some may carry significant risks.

According to the report, climate action towards 1.5ºC can also help achieve the SDGs, including those related to agriculture, water, energy, biodiversity, public health and cities – sectors that influence and are influenced by the climate. The SR15 highlights in particular “robust synergies” between 1.5°C pathways and SDGs 3 (good health and well-being), 7 (affordable and clean energy), 11 (sustainable cities and communities), 12 (responsible consumption and production) and 14 (life below water).
In a statement following the release of the SR15, UN Secretary-General Antonio Guterres called the report “an ear-splitting wake-up call to the world” noting that “a half of a degree of warming makes a world of difference,” including more heatwaves, greater species loss, increased water scarcity and a total wipe-out of the world’s coral reefs. Guterres stressed the need to: plant billions of trees; drastically reduce fossil fuel use and phase out coal by 2050; ramp up the installation of wind and solar power; invest in climate-friendly sustainable agriculture; and consider new technologies such as CCS. In this regard, he urged countries to raise their ambition, strengthen their nationally determined contributions (NDCs) and urgently accelerate implementation of the Paris Agreement.

The SR15 will be a key scientific input into the Katowice Climate Change Conference in Poland in December 2018, when governments are expected to adopt implementation guidelines for the Paris Agreement.

The SR15 is the first in a series of Special Reports to be produced during the IPCC’s sixth assessment cycle. In 2019, the IPCC will release Special Reports on the Ocean and Cryosphere in a Changing Climate (SROCC) and Climate Change and Land (SRCCL). The Panep will also approve a 2019 Refinement to the 2006 IPCC Guidelines for National GHG Inventories at IPCC-49 in May 2019 in Kyoto, Japan.