Topic of Discussion At Local Chains Meet Up Was Environment

The International Local Chains Meet Up Conference and Fair (YZB) was held at İstanbul Haliç Congress Center between 11th and 12th April 2018. This conference brings together the representatives of local chain stores in the area of organized food retail and the sector’s leading producer and supplier brands.

The main topic at the fair were elements threatening our future on sustainability of the planet, environment, agriculture, food access. A session called “If mankind survives with nature, let nature survive with retail” was also organized to draw attention to environmental issues, with Güven İslamoğlu, TV program producer and director as moderator, and with the participation of Alphan Eröztürk, ÇEVKO Foundation Public and Foreign Affairs Director; Dr Uygar Özesmi, founder of Good4Trust; and Oben Akyol, General Manager of Tema Foundation.

Critical Warning For 2050!
In his speech, Dr Uygar Özesmi said, “It’s high time we started doing some things right for the sustainability of the planet. Atmosphere and water resources are scarce. The reason why we are at this point is probably our lack of awareness. We are polluting our waters, our air. The amount of clean and fresh air we inhale is becoming less by the minute.”

He went on, “We are constantly changing the chemistry of the atmosphere with coal-fired thermal power plants, fossil fuels, by burning petrol, coal, natural gases, emitting carbondioxide. When the Turkish Republic was founded, the amount of carbondioxide in the atmosphere was 280 ppm whereas today it is over 400 ppm. There has been a 1,1-degree-increase in the temperature since 1860. On average 1,1 degrees lead to an increase of 7 to 10 degrees in the extreme. If this situation continues, the average temperature will have increased by 2,8 degrees by 2050. And what will we do in February 2050 when the outside temperature has reached 70 degrees centigrate? Our planet is giving out alarms in all areas. Another risk besides climate change is the decrease in biodiversity. The fall in the animal species is now 1 million times the normal rate. We must take measures immediately.” 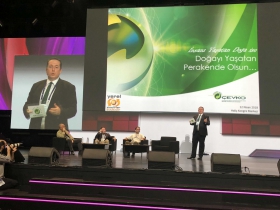 “The greatest destruction in nature specifics is due to poverty”
At the session, Oben Akyol said regarding the selling of plastic bags within the ‘Waste Directive’ from 1st January 2019, “It is said that consumers do not wish to pay for the plastic shopping bags. The important thing here is not the cost of the bag when using it. We need a holistic point of view to be able to understand nature. That plastic bag is soil, that plastic bag is water. When we throw away the cap of a plastic bottle, it comes out of the stomach of a bird. We have to understand our eco-system correctly. When we are out in the nature, we treat the earth loutishly; we use too many chemicals. The greatest destruction in the specifics of nature comes from poverty. The priorities of a poor rural area are certainly different.”

“The conscious consumption messages given to the consumers by the retailers are critical”
Also at the session Alphan Eröztürk said, “According to the statistics, in Turkey, 1 person produces 1,2 kg of waste daily, and this amounts to 440 kg per year. With a population of 81 million, we produce a yearly amount of 35 million tons of waste, of which 7 million tons are recycled. If we are to speak of environment and waste, we should be aware of this amount.”

Eröztürk also gave warnings on wastage and said, “Data in the world indicate that every year a third of produced food goes to waste. Should we continue to waste our food like this, there will be food shortage and famine in our future, which looks very dark. When we look at the situation in Turkey, the amount of bread which we say ‘it is a sin to throw away’, which we hang on tree branches from time to time, which we just throw away, is 6 million. The importance of retail is great at the point of consumption, its messages very critical. There will always be waste naturally, however, the retailer should tell its customer to ‘consume responsibly’. Another sensitive issue on waste is the plastic shopping bag.”

Eröztürk went on, “1 trillion plastic bags are used in the world. The important thing here is the greatness of the consumption rather than the material. If we continue like this, if we don’t separate our waste properly, if we produce waste, there will be more plastic particles than fish in our seas. At this point the retail should step in. For starters, the stores should target becoming zero waste stores. Maybe environmental pollution was misrepresented until today; it was suggested that our world is in danger. Actually we are the ones in danger. If we wish to protect nature, protect ourselves, there is one thing to do – consume less.”